Some parts of the Abia Federal High Court were gutted by fire on Tuesday night when three petroleum tankers confiscated by the court went up in flames.

It was gathered the incident, which caused panic among the area housing the headquarters of the Department of State Security Service (DSS), Abia Assembly, the Zone 9 Headquarters of the Nigeria Police Force (NPF) and among state-of-the-art buildings engulfed 9 out of 10 cars parked within the area court building. 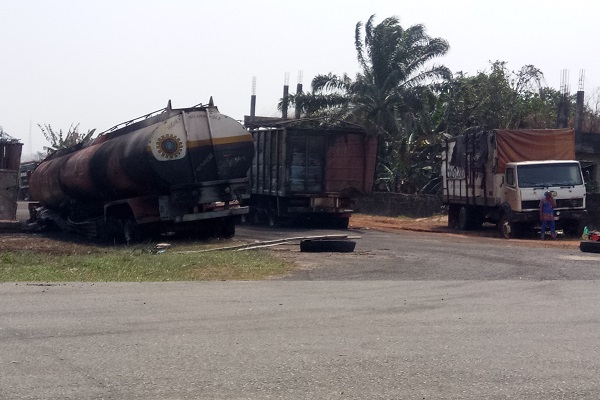 It was learnt that the cars were exhibits in various cases before the court.

The PRESS gathered that it took the timely intervention of personnel of State and Federal fire services to prevent the fire from engulfing adjourning buildings estimated to run into several million.

Speaking on the incident, the acting State Comptroller of Abia State Fire Service, Arua Nnanna, stated that the fire incident may have triggered by the gasoline that spilled on the floor where the trucks and other vehicles were parked.

DID YOU SEE THIS:  How Army, DSS shot seven ESN members dead, arrested five in Rivers

“Two out of the three petroleum tankers had gasoline in them. When we arrived, we noticed that there was a spill of gasoline on the ground from one of the tankers that could have triggered the fire incident.

“It took the efforts of state and federal government fire service personnel to attend to the fire and contain it from spreading to other government and individual facilities in the area. Investigation is on to know the cause of the fire.”

How DSS Officials Helped Me In Kidnapping A Businessman – Suspect Confesses